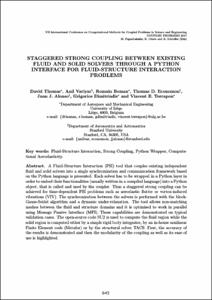 Economon, Thomas D.
Alonso, Juan J.
Dimitriadis, Gregorios
Terrapon, Vincent E.
Document typeConference report
PublisherCIMNE
Rights accessOpen Access
All rights reserved. This work is protected by the corresponding intellectual and industrial property rights. Without prejudice to any existing legal exemptions, reproduction, distribution, public communication or transformation of this work are prohibited without permission of the copyright holder
Abstract
A Fluid-Structure Interaction (FSI) tool that couples existing independent fluid and solid solvers into a single synchronization and communication framework based on the Python language is presented. Each solver has to be wrapped in a Python layer in order to embed their functionalities (usually written in a compiled language) into a Python object, that is called and used by the coupler. Thus a staggered strong coupling can be achieved for time-dependent FSI problems such as aeroelastic flutter or vortex-induced vibrations (VIV). The synchronization between the solvers is performed with the block- Gauss-Seidel algorithm and a dynamic under-relaxation. The tool allows non-matching meshes between the fluid and structure domains and it is optimised to work in parallel using Message Passive Interface (MPI). These capabilities are demonstrated on typical validation cases. The open-source code SU2 is used to compute the fluid region while the solid region is computed either by a simple rigid body integrator, by an in-house nonlinear Finite Element code (Metafor) or by the structural solver TACS. First, the accuracy of the results is demonstrated and then the modularity of the coupling as well as its ease of use is highlighted.
URIhttp://hdl.handle.net/2117/190653
ISBN978-84-946909-2-1
Collections
Share: