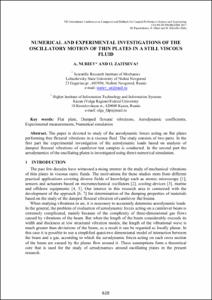 Show full item record
Nuriev, A.
Zaitseva, O.
Document typeConference report
PublisherCIMNE
Rights accessOpen Access
All rights reserved. This work is protected by the corresponding intellectual and industrial property rights. Without prejudice to any existing legal exemptions, reproduction, distribution, public communication or transformation of this work are prohibited without permission of the copyright holder
Abstract
The past few decades have witnessed a rising interest in the study of mechanical vibrations of thin plates in viscous static fluids. The motivations for these studies stem from different practical applications covering diverse fields of knowledge such as atomic microscopy [1], sensors and actuators based on micromechanical oscillators [2], cooling devices [3], marine and offshore equipments [4, 5]. Our interest in this research area is connected with the development of the approach [6, 7] for determination of the damping properties of materials based on the study of the damped flexural vibration of cantilever flat beams. When studying vibrations in air, it is necessary to accurately determine aerodynamic loads. In the general, the problem of evaluation of aerodynamic forces acting on a cantilever beam is extremely complicated, mainly because of the complexity of three-dimensional gas flows caused by vibrations of the beam. But when the length of the beam considerably exceeds its width and thickness at low structural vibration modes, the length of the vibrational wave is much greater than deviations of the beam, as a result it can be regarded as locally planar. In this case it is possible to use a simplified quasi-two dimensional model of interaction between the beam and a gas, according to which the aerodynamic forces acting on each cross section of the beam are caused by the planar flow around it. These assumptions form a theoretical core that is used for the study of aerodynamics around oscillating plates in the present research.
URIhttp://hdl.handle.net/2117/190651
ISBN978-84-946909-2-1
Collections
Share: