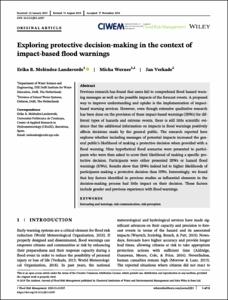 Werner, Micha
Verkade, Jan
Document typeArticle
Rights accessOpen Access
Abstract
Previous research has found that users fail to comprehend flood hazard warning messages as well as the possible impacts of the forecast events. A proposed way to improve understanding and uptake is the implementation of impact-based warning services. However, even though extensive qualitative research has been done on the provision of these impact-based warnings (IBWs) for different types of hazards and extreme events, there is still little scientific evidence that the additional information on impacts in flood warnings positively affects decisions made by the general public. The research reported here explores whether including messages of potential impacts increased the general public's likelihood of making a protective decision when provided with a flood warning. Nine hypothetical flood scenarios were presented to participants who were then asked to score their likelihood of making a specific protective decision. Participants were either presented IBWs or hazard flood warnings (HWs). Results show that IBWs indeed led to higher likelihoods of participants making a protective decision than HWs. Interestingly, we found that key factors identified in previous studies as influential elements in the decision-making process had little impact on their decision. These factors include gender and previous experience with flood warnings.
CitationMelendez, E.; Werner, M.; Verkade, J. Exploring protective decision-making in the context of impact-based flood warnings. "Journal of flood risk management", 17 Desembre 2019, núm. e12587, p. 1-11.
URIhttp://hdl.handle.net/2117/190603
DOI10.1111/jfr3.12587
ISSN1753-318X
Publisher versionhttps://onlinelibrary.wiley.com/doi/full/10.1111/jfr3.12587
Collections
Share: