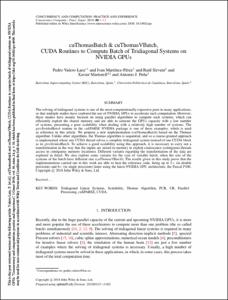 Peña, Antonio J.
Document typeArticle
PublisherWiley
Rights accessOpen Access
All rights reserved. This work is protected by the corresponding intellectual and industrial property rights. Without prejudice to any existing legal exemptions, reproduction, distribution, public communication or transformation of this work are prohibited without permission of the copyright holder
ProjectCOMPUTACION DE ALTAS PRESTACIONES VII (MINECO-TIN2015-65316-P)
HBP SGA1 - Human Brain Project Specific Grant Agreement 1 (EC-H2020-720270)
IJCI-2015-23266 (MINECO-IJCI-2015-23266)
Abstract
The solving of tridiagonal systems is one of the most computationally expensive parts in many applications, so that multiple studies have explored the use of NVIDIA GPUs to accelerate such computation. However, these studies have mainly focused on using parallel algorithms to compute such systems, which can efficiently exploit the shared memory and are able to saturate the GPUs capacity with a low number of systems, presenting a poor scalability when dealing with a relatively high number of systems. The gtsvStridedBatch routine in the cuSPARSE NVIDIA package is one of these examples, which is used as reference in this article. We propose a new implementation (cuThomasBatch) based on the Thomas algorithm. Unlike other algorithms, the Thomas algorithm is sequential, and so a coarse-grained approach is implemented where one CUDA thread solves a complete tridiagonal system instead of one CUDA block as in gtsvStridedBatch. To achieve a good scalability using this approach, it is necessary to carry out a transformation in the way that the inputs are stored in memory to exploit coalescence (contiguous threads access to contiguous memory locations). Different variants regarding the transformation of the data are explored in detail. We also explore some variants for the case of variable batch, when the size of the systems of the batch has different size (cuThomasVBatch). The results given in this study prove that the implementations carried out in this work are able to beat the reference code, being up to 5× (in double precision) and 6× (in single precision) faster using the latest NVIDIA GPU architecture, the Pascal P100.
CitationValero-Lara, P. [et al.]. cuThomasBatch and cuThomasVBatch, CUDA Routines to compute batch of tridiagonal systems on NVIDIA GPUs. "Concurrency and computation: practice and experience", 1 Gener 2018, vol. 30, núm. 24, p. 1-10.
URIhttp://hdl.handle.net/2117/190528
DOI10.1002/cpe.4909
ISSN1532-0634
Publisher versionhttps://onlinelibrary.wiley.com/doi/abs/10.1002/cpe.4909
Collections
Share: