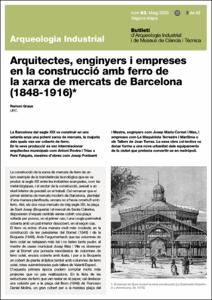 Except where otherwise noted, content on this work is licensed under a Creative Commons license : Attribution-NonCommercial-NoDerivs 3.0 Spain
Abstract
Architects, engineers and companies involved in constructing with iron the network of Barcelona markets (1848-1916) In around seventy years, the Barcelona of the nineteenth century constructed a solid network of covered markets, most of which were built with iron structures. Their construction brought together municipal architects such as Antoni Rovira i Trias, Miquel Pascual i Tintoré or Pere Falqués, master builders like Josep Fontserè i Mestre, engineers such as Michel de Bergue or Josep Maria Cornet i Mas, and specialised companies such as La Maquinista Terrestre y Marítima or the workshops of Joan Torras. Their collective work gave rise to a new urban form based on the construction of facilities for a city that wanted to become a metropolis. In the Born market, the team of Fontserè-La Maquinista showed the viability of iron markets inspired by the model of Les Halles in Paris. However, it was the Rovira-La Maquinista partnership that systematised this form of construction and enabled it to be introduced in various neighbourhoods of Barcelona. This was a model of a coveted monumental nature. It was only rejected by Joan Torras with his lightweight proposals that were close to the functional tradition, first in the Abaceria Central and then in the transformation of the markets of La Boqueria and Santa Caterina.
CitationGraus, R. Arquitectes, enginyers i empreses en la construcció amb ferro de la xarxa de mercats de Barcelona (1848-1916). "Butlletí d'arqueologia industrial i de museus de ciència i tècnica", Maig 2020, vol. II, núm. 83, p. 3-9.
URIhttp://hdl.handle.net/2117/190477
ISSN1988-9534
Collections
Share: