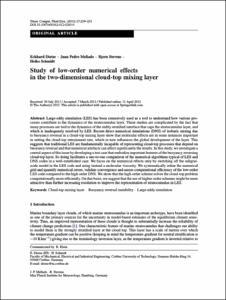 Stevens, Bjorn
Schmidt, Heiko
Document typeArticle
Rights accessOpen Access
Abstract
Large-eddy simulation (LES) has been extensively used as a tool to understand how various processes contribute to the dynamics of the stratocumulus layer. These studies are complicated by the fact that many processes are tied to the dynamics of the stably stratified interface that caps the stratocumulus layer, and which is inadequately resolved by LES. Recent direct numerical simulations (DNS) of isobaric mixing due to buoyancy reversal in a cloud-top mixing layer show that molecular effects are in some instances important in setting the cloud-top entrainment rate, which in turn influences the global development of the layer. This suggests that traditional LES are fundamentally incapable of representing cloud-top processes that depend on buoyancy reversal and that numerical artefacts can affect significantly the results. In this study, we investigate a central aspect of this issue by developing a test case that embodies important features of the buoyancy-reversing cloud-top layer. So doing facilitates a one-to-one comparison of the numerical algorithms typical of LES and DNS codes in a well-established case. We focus on the numerical effects only by switching off the subgridscale model in the LES code and using instead a molecular viscosity. We systematically refine the numerical grid and quantify numerical errors, validate convergence and assess computational efficiency of the low-order LES code compared to the high-order DNS. We show that the high-order scheme solves the cloud-top problem computationally more efficiently. On that basis, we suggest that the use of higher-order schemes might be more attractive than further increasing resolution to improve the representation of stratocumulus in LES.
CitationDietze, E. [et al.]. Study of low-order numerical effects in the two-dimensional cloud-top mixing layer. "Theoretical and computational fluid dynamics", 1 Juny 2013, vol. 27, p. 239-251.
URIhttp://hdl.handle.net/2117/190413
DOI10.1007/s00162-012-0263-0
ISSN0935-4964
Publisher versionhttps://link.springer.com/article/10.1007/s00162-012-0263-0
Collections
Share: