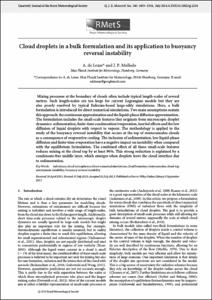 Salvo que se indique lo contrario, los contenidos de esta obra estan sujetos a la licencia de Creative Commons : Reconocimiento-NoComercial-SinObraDerivada 3.0 España
Resumen
Mixing processes at the boundary of clouds often include typical length-scales of several metres. Such length-scales are too large for current Lagrangian models but they are also poorly resolved by typical Eulerian-based large-eddy simulations. Here, a bulk formulation is introduced for direct numerical simulations. Two main assumptions sustain this approach: the continuum approximation and the liquid-phase diffusion approximation. The formulation includes the small-scale features that originate from microscopic droplet dynamics: sedimentation, finite-time condensation/evaporation, inertial effects and the low diffusion of liquid droplets with respect to vapour. The methodology is applied to the study of the buoyancy reversal instability that occurs at the top of stratocumulus clouds as a consequence of evaporative cooling. The inclusion of sedimentation, low liquid-phase diffusion and finite-time evaporation have a negative impact on instability when compared with the equilibrium formulation. The combined effect of all these small-scale features reduces mixing at the cloud top by at least 90%. This strong reduction is explained by a condensate-free middle layer, which emerges when droplets leave the cloud interface due to sedimentation.
Citaciónde Lozar, A.; Mellado, J. P. Cloud droplets in a bulk formulation and its application for the buoyancy reversal instability. "Quarterly journal of the Royal Meteorological Society", 28 Juliol 2014, vol. 140, p. 1493-1504.
URIhttp://hdl.handle.net/2117/190370
DOI10.1002/qj.2234
ISSN0035-9009
Versión del editorhttps://rmets.onlinelibrary.wiley.com/doi/10.1002/qj.2234
Colecciones
Comparte: