Meshless modelling of microstructure evolution in the continuous casting of steel 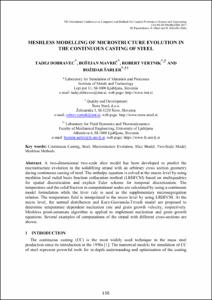 Show full item record
Dobravec, Tadej
Mavric, Bostjan
Vertnik, Robert
Sarler, Bozidar
Document typeConference report
PublisherCIMNE
Rights accessOpen Access
Abstract
A two-dimensional two-scale slice model has been developed to predict the microstructure evolution in the solidifying strand with an arbitrary cross section geometry during continuous casting of steel. The enthalpy equation is solved at the macro level by using meshless local radial basis function collocation method (LRBFCM) based on multiquadrics for spatial discretization and explicit Euler scheme for temporal discretization. The temperature and the solid fraction in computational nodes are calculated by using a continuum model formulation while the lever rule is used as the supplementary microsegregation relation. The temperature field is interpolated to the micro level by using LRBFCM. At the micro level, the normal distribution and Kurz-Giovanola-Trivedi model are proposed to determine temperature dependent nucleation rate and grain growth velocity, respectively. Meshless point-automata algorithm is applied to implement nucleation and grain growth equations. Several examples of computations of the strand with different cross-sections are shown.
URIhttp://hdl.handle.net/2117/190289
ISBN978-84-946909-2-1
Collections
Share: