A computational framework for thermal coupling in hybrid fire simulation 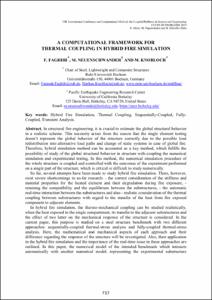 Show full item record
Faghihi, F.
Neuenschwander, M.
Knobloch, M.
Document typeConference report
PublisherCIMNE
Rights accessOpen Access
All rights reserved. This work is protected by the corresponding intellectual and industrial property rights. Without prejudice to any existing legal exemptions, reproduction, distribution, public communication or transformation of this work are prohibited without permission of the copyright holder
Abstract
In structural fire engineering, it is crucial to estimate the global structural behavior in a realistic scheme. This necessity arises from the reason that the single element testing doesn’t represent the global behavior of the structure correctly due to the possible load redistribution into alternative load paths and change of static systems in case of global fire. Therefore, hybrid simulation method can be accounted as a key method, which fulfills the possibility of study of the global structural behavior in structure with coupling the numerical simulation and experimental testing. In this method, the numerical simulation procedure of the whole structure is coupled and controlled with the outcomes of the experiment performed on a single part of the structure, which is critical or difficult to study numerically. So far, several attempts have been made to study hybrid fire simulation. There, however, exist severe shortcomings in so-far research: - the correct consideration of the stiffness and material properties for the heated element and their degradation during fire exposure, - retaining the compatibility and the equilibrium between the substructures, - the automatic real-time interaction between the substructures and also - realistic consideration of the thermal coupling between substructures with regard to the transfer of the heat from fire exposed component to adjacent elements. In hybrid fire simulation, the thermo-mechanical coupling can be studied realistically, when the heat exposed to the single compartment, its transfer to the adjacent substructures and the effect of two latter on the mechanical response of the structure is considered. In the current paper, this purpose is studied on a steel structure benchmark with two different approaches: sequentially-coupled thermal-stress analysis and fully-coupled thermal-stress analysis. Here, the mathematical and mechanical aspects of each approach and their difference regarding the response of the structure will be investigated. Also, their application in the hybrid fire simulation and the importance of the real-time issue in these approaches are outlined. In this paper, the numerical model of the intended benchmark which interacts automatically with another numerical model, representing the experimental substructure exposed to fire is studied. Therefore, the implementation of hybrid fire simulation and different aspects of the thermal coupling including the existence of heat transfer and mechanical and thermal properties will be discussed.
URIhttp://hdl.handle.net/2117/190225
ISBN978-84-949194-5-9
Collections
Share: