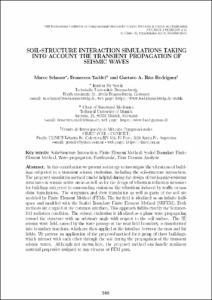 Show full item record
Schauer, Marco
Taddei, Francesca
Ríos Rodríguez, Gustavo A.
Document typeConference report
PublisherCIMNE
Rights accessOpen Access
Abstract
In this contribution we present a strategy to investigate the vibrations of build­ ings subjected to a transient seismic excitation, including the soil-structure inte ract ion . The proposed simulation method can be helpful during the design of earthquake-resistant structures in seismic active areas as well as for the design of vibration reduction measures for buildings subjected to surrounding emissions like vibrations induced by traffic or ma­ chine foundations. The structures and their foundation as well as parts of the soil arc modeled by Finite Element Method (FEM). The far field is idealized as an infinite half­ space and modeled with the Scaled Boundary Finite Element Method (SBFEM). Both methods arc coupled at the common inter face. This approach fulfills exactly the Sommer­ feld radiation condition. The seismic excitation is idealized as a plane wave propagating toward the structure with an arbitrary angle with respect to the soil surface. The 3D seismic wave field, caused by the wave passage at the near field boundary, is transformed into boundary tractions , which arc then applied at the interface between the near and far fields. We present an application of the proposed method for a group of three buildings, which interact with each other through the soil during the propagation of the transient seismic waves. Although not shown here, the proposed method can handle nonlinear material properties assigned to any clement of FEM part.
URIhttp://hdl.handle.net/2117/190147
ISBN978-84-949194-5-9
Collections
Share: