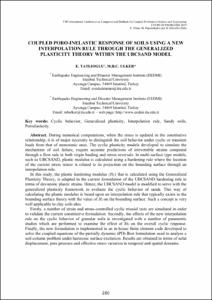 Show full item record
Tatlioglu, E.
Ulker, M.B.C.
Document typeConference report
PublisherCIMNE
Rights accessOpen Access
Abstract
During numerical computations, when the stress is updated in the constitutive relationship, it is of major necessity to distinguish the soil behavior under cyclic or transient loads from that of monotonic ones. The cyclic plasticity models developed to simulate the mechanism of soil failure, require accurate predictions of irreversible strains computed through a flow rule in both virgin loading and stress reversals. In multi-surface type models, such as UBCSAND, plastic modulus is calculated using a hardening rule where the location of the current stress tensor is related to its projection on the bounding surface through an interpolation rule. In this study, the plastic hardening modulus (HL) that is calculated using the Generalized Plasticity Theory, is adapted in the current formulation of the UBCSAND hardening rule in terms of deviatoric plastic strains. Hence, the UBCSAND model is modified to serve with the generalized plasticity framework to evaluate the cyclic behavior of sands. This way of calculating the plastic modulus is based upon an interpolation rule that typically exists in the bounding surface theory with the value of HL on the bounding surface. Such a concept is very well applicable to clay soils also. Firstly, a number of strain and stress-controlled cyclic triaxial tests are simulated in order to validate the current constitutive formulation. Secondly, the effects of the new interpolation rule on the cyclic behavior of granular soils is investigated with a number of parametric studies which are performed to examine the effect of HL on the overall cyclic response. Finally, the new formulation is implemented in an in-house finite element code developed to solve the coupled equations of the partially dynamic (PD) Biot formulation used to analyse a soil-column problem under harmonic surface excitation. Results are obtained in terms of solid displacement, pore pressure and effective stress variation in temporal and spatial domains.
URIhttp://hdl.handle.net/2117/190009
ISBN978-84-949194-5-9
Collections
Share: