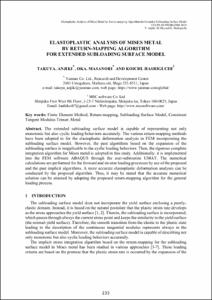 Show full item record
Anjiki, Takuya
Masanori, Oka
Hashiguchi, Koichi
Document typeConference report
PublisherCIMNE
Rights accessOpen Access
Abstract
The extended subloading surface model is capable of representing not only monotonic but also cyclic loading behaviors accurately. The various return-mapping methods have been adopted to for the elastoplastic deformation analysis in FEM incorporating the subloading surface model. However, the past algorithms based on the expansion of the subloading surface is inapplicable to the cyclic loading behaviors. Then, the rigorous complete integration algorithm for Mises metal is adopted in this study. Additionally, it is implemented into the FEM software ABAQUS through the user-subroutine UMAT. The numerical calculations are performed for the forward and inverse loading processes by use of the proposed and the past implicit algorithms. A more accurate elastoplastic deformation analyses can be conducted by the proposed algorithm. Thus, it may be stated that the accurate numerical solution can be attained by adopting the proposed return-mapping algorithm for the general loading process.
URIhttp://hdl.handle.net/2117/189977
ISBN978-84-949194-5-9
Collections
Share: