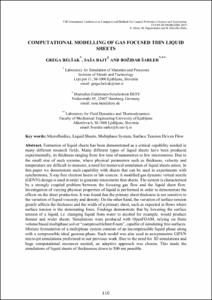 Show full item record
Belsak, Grega
Bajt, Sasa
Sarler, Bozidar
Document typeConference report
PublisherCIMNE
Rights accessOpen Access
All rights reserved. This work is protected by the corresponding intellectual and industrial property rights. Without prejudice to any existing legal exemptions, reproduction, distribution, public communication or transformation of this work are prohibited without permission of the copyright holder
Abstract
Formation of liquid sheets has been demonstrated as a critical capability needed in many different research fields. Many different types of liquid sheets have been produced experimentally, its thickness ranging from few tens of nanometres to few micrometres. Due to the small size of such systems, where physical parameters such as thickness, velocity and temperature are difficult to measure, a need for numerical simulation of liquid sheets arises. In this paper we demonstrate such capability with sheets that can be used in experiments with synchrotrons, X-ray free electron lasers or lab sources. A modified gas dynamic virtual nozzle (GDVN) design is used in order to generate micrometre thin sheets. The system is characterised by a strongly coupled problem between the focusing gas flow and the liquid sheet flow. Investigation of varying physical properties of liquid is performed in order to demonstrate the effects on the sheet production. It was found that the primary sheet thickness is not sensitive to the variation of liquid viscosity and density. On the other hand, the variation of surface tension greatly affects the thickness and the width of a primary sheet, such as expected in flows where surface tension is the dominating force. Findings demonstrate that by lowering the surface tension of a liquid, i.e. changing liquid from water to alcohol for example, would produce thinner and wider sheets. Simulations were produced with OpenFOAM, relying on finite volume based multiphase solver “compressibleInterFoam”, capable of simulating free surfaces. Mixture formulation of a multiphase system consists of an incompressible liquid phase along with a compressible ideal gaseous phase. Such model was also used in axisymmetric GDVN micro-jet simulations preformed in our previous work. Due to the need for 3D simulations and huge computational resources needed, an adaptive approach was chosen. This made the simulations of liquid sheets of thicknesses down to 500 nm possible.
URIhttp://hdl.handle.net/2117/189959
ISBN978-84-949194-5-9
Collections
Share: