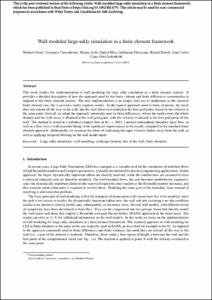 Document typeArticle
PublisherWiley
Rights accessOpen Access
European Commission's projectEoCoE-II - Energy Oriented Center of Excellence : toward exascale for energy (EC-H2020-824158)
Abstract
This work studies the implementation of wall modeling for large‐eddy simulation in a finite element context. It provides a detailed description of how the approach used by the finite volume and finite differences communities is adapted to the finite element context. The new implementation is as simple and easy to implement as the classical finite element one, but it provides vastly superior results. In the typical approach used in finite elements, the mesh does not extend all the way to the wall, and the wall stress is evaluated at the first grid point, based on the velocity at the same point. Instead, we adopt the approach commonly used in finite differences, where the mesh covers the whole domain and the wall stress is obtained at the wall grid point, with the velocity evaluated at the first grid point off the wall. The method is tested in a turbulent channel flow at R e τ =2003, a neutral atmospheric boundary layer flow, and a flow over a wall‐mounted hump, with significant improvement in the results compared to the standard finite element approach. Additionally, we examine the effect of evaluating the input velocity further away from the wal
CitationOwen, H. [et al.]. Wall‐modeled large‐eddy simulation in a finite element framework. "Numerical Methods in Fluids", Gener 2020, vol. 92, núm. 1, p. 20-37.
URIhttp://hdl.handle.net/2117/189903
DOI10.1002/fld.4770
ISSN1097-0363
Publisher versionhttps://onlinelibrary.wiley.com/doi/abs/10.1002/fld.4770
Collections
Share: