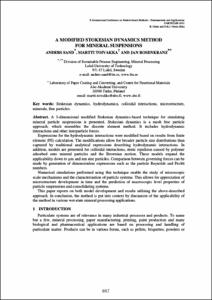 Show full item record
Sand, Anders
Toivakka, Martti
Rosenkranz, Jan
Document typeConference report
PublisherCIMNE
Rights accessOpen Access
Abstract
A 3-dimensional modified Stokesian dynamics-based technique for simulating mineral particle suspensions is presented. Stokesian dynamics is a mesh free particle approach, which resembles the discrete element method. It includes hydrodynamic interactions and other interparticle forces. Expressions for the hydrodynamic interactions were modified based on results from finite element (FE) calculation. The modifications allow for broader particle size distributions than captured by traditional analytical expressions describing hydrodynamic interactions. In addition, models are presented for colloidal interactions, steric repulsion caused by polymer adsorbed onto mineral particles and the Brownian motion. These models expand the applicability down to µm and nm size particles. Comparison between governing forces can be made by generation of dimensionless expressions such as the particle Reynolds and Peclét numbers. Numerical simulations performed using this technique enable the study of microscopic scale mechanisms and the characterisation of particle systems. This allows for appreciation of microstructure development in time and the prediction of macroscopic level properties of particle suspensions and consolidating systems. This paper reports on both model development and results utilising the above-described approach. In conclusion, the method is put into context by discussion of the applicability of the method in various wet-state mineral processing applications.
URIhttp://hdl.handle.net/2117/189817
ISBN978-84-89925-67-0
Collections
Share: