Wind Shear and Buoyancy Reversal at the Top of Stratocumulus 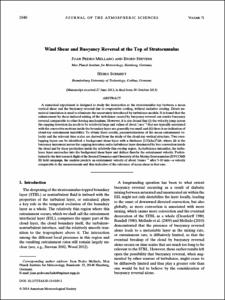 Stevens, Bjorn
Schmidt, Heiko
Document typeArticle
Rights accessOpen Access
Abstract
A numerical experiment is designed to study the interaction at the stratocumulus top between a mean vertical shear and the buoyancy reversal due to evaporative cooling, without radiative cooling. Direct numerical simulation is used to eliminate the uncertainty introduced by turbulence models. It is found that the enhancement by shear-induced mixing of the turbulence caused by buoyancy reversal can render buoyancy reversal comparable to other forcing mechanisms. However, it is also found that (i) the velocity jump across the capping inversion Du needs to be relatively large and values of about 1 m s21 that are typically associated with the convective motions inside the boundary layer are generally too small and (ii) there is no indication of cloud-top entrainment instability. To obtain these results, parameterizations of the mean entrainment velocity and the relevant time scales are derived from the study of the cloud-top vertical structure. Two overlapping layers can be identified: a background shear layer with a thickness (1/3)(Du) 2 /Db, where Db is the buoyancy increment across the capping inversion and a turbulence layer dominated by free convection inside the cloud and by shear production inside the relatively thin overlap region. As turbulence intensifies, the turbulence layer encroaches into the background shear layer and defines thereby the entrainment velocity. Particularized to the first research flight of the Second Dynamics and Chemistry of the Marine Stratocumulus (DYCOMS II) field campaign, the analysis predicts an entrainment velocity of about 3 mm s21 after 5–10 min—a velocity comparable to the measurements and thus indicative of the relevance of mean shear in that case.
CitationMellado, J. P.; Stevens, B.; Schmidt, H. Wind Shear and Buoyancy Reversal at the Top of Stratocumulus. "Journal of the atmospheric sciences", 1 Març 2014, vol. 71, p. 1040-1057.
URIhttp://hdl.handle.net/2117/189754
DOI10.1175/JAS-D-13-0189.1
ISSN0022-4928
Publisher versionhttps://journals.ametsoc.org/doi/full/10.1175/JAS-D-13-0189.1
Collections
Share: