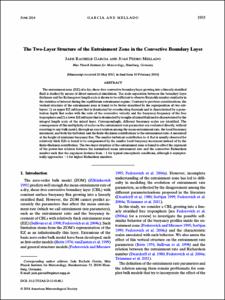 Document typeArticle
Rights accessOpen Access
Abstract
The entrainment zone (EZ) of a dry, shear-free convective boundary layer growing into a linearly stratified fluid is studied by means of direct numerical simulation. The scale separation between the boundary layer thickness and the Kolmogorov length scale is shown to be sufficient to observe Reynolds number similarity in the statistics of interest during the equilibrium entrainment regime. Contrary to previous considerations, the vertical structure of the entrainment zone is found to be better described by the superposition of two sublayers: 1) an upper EZ sublayer that is dominated by overshooting thermals and is characterized by a penetration depth that scales with the ratio of the convective velocity and the buoyancy frequency of the free troposphere and 2) a lower EZ sublayer that is dominated by troughs of mixed fluid and is characterized by the integral length scale of the mixed layer. Correspondingly, different buoyancy scales are identified. The consequences of this multiplicity of scales on the entrainment rate parameters are evaluated directly, without resorting to any bulk model, through an exact relation among the mean entrainment rate, the local buoyancy increment, and both the turbulent and the finite-thickness contributions to the entrainment ratio A measured at the height of minimum buoyancy flux. The smaller turbulent contribution to A that is usually observed for relatively thick EZs is found to be compensated by the smaller local buoyancy increment instead of by the finite-thickness contribution. The two-layer structure of the entrainment zone is found to affect the exponent of the power-law relation between the normalized mean entrainment rate and the convective Richardson number such that the exponent deviates from 21 for typical atmospheric conditions, although it asymptotically approaches 21 for higher Richardson numbers
CitationGarcia, J.; Mellado, J. P. The Two-Layer Structure of the Entrainment Zone in the Convective Boundary Layer. "Journal of the atmospheric sciences", 1 Juny 2014, vol. 71, p. 1935-1955.
URIhttp://hdl.handle.net/2117/189752
DOI10.1175/JAS-D-13-0148.1
ISSN0022-4928
Publisher versionhttps://journals.ametsoc.org/doi/full/10.1175/JAS-D-13-0148.1
Collections
Share: