How Much Does It Cost to Go Off-Grid with Renewables? A Case Study of a Polygeneration System for a Neighbourhood in Hermosillo, Mexico 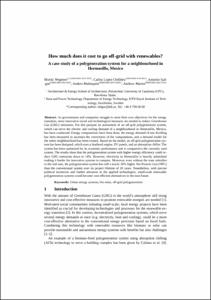 Malmquist, Anders
Martin, Andrew
Document typeConference report
Rights accessOpen Access
Abstract
As governments and companies struggle to meet their own objectives for the energy transition, more innovative social and technological measures are needed to reduce Greenhouse Gas (GHG) emissions. For this purpose, an assessment of an off-grid polygeneration system, which can serve the electric and cooling demand of a neighbourhood in Hermosillo, Mexico, has been conducted. Energy computations have been done, the energy demand of one dwelling has been measured to ascertain the correctness of the computations, and a demand model for the entire neighbour-hood has been created. Based on the model, an off-grid polygeneration system has been designed, which uses a biodiesel engine, PV panels, and an absorption chiller. The system has been optimized for its economic performance and is compared to the currently used system. The results show that the polygeneration system with higher energy efficiency could reduce GHG emissions down to 14%. However, electricity in Hermosillo is heavily subsidized making it harder for innovative systems to compete. Moreover, even without the state subsidies to the end-user, the polygeneration system has still a nearly 30% higher Net Present Cost (NPC) than the conventional system over its project lifetime of 20 years. Nonetheless, with precise political incentives and further advances in the applied technologies, small-scale renewable polygeneration systems could become cost-efficient alternatives in the near future.
CitationWegener, M. [et al.]. How Much Does It Cost to Go Off-Grid with Renewables? A Case Study of a Polygeneration System for a Neighbourhood in Hermosillo, Mexico. A: Sustainability in Energy and Buildings Annual Meeting. "Sustainability in Energy and Buildings Proceedings of SEB 2019". 2019, p. 395-405.
URIhttp://hdl.handle.net/2117/189694
DOI10.1007/978-981-32-9868-2_34
ISBN978-981-329-868-2
Publisher versionhttps://link.springer.com/chapter/10.1007/978-981-32-9868-2_34
Collections
Share: