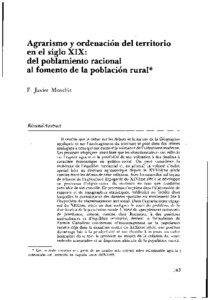 The debate on the origins and nature of applied geography and regional planning appears to be stated in analogous terms to the birth of modern urbanism. Not only utopian intellectuals but also “civil servants” have meditated on the rural environment and the possibility of its utilization for economic or socio-political ends. The search for regional balance, and, in general, the quest for spatial order present in agronomical discussion since the eighteenth century can be considered to be the origins of such meditation. New reform policies applied in Spanish agriculture in the nineteenth century mark the beginning of a process of definition of the rural environment as a prerequesite for its control. This process is achieved through the production of statistical, medica1 and legal documents and topographies in which the understanding of spatially organized statistics is closely related to regional planning hypotheses. In nineteenth century Spanish agrarianism, the preocupation with the problem of the distribution of rural population stands out. Jovellano's ideal of “rational settlement” which, as in Rousseau's theory, was associated with an anti-urban focus and regional balance, is replaced, in the second half of the nineteenth century, by Fermin Caballero's ideas on the enouragement of rural settlement. Cabellero's is a much more productive point of view, an attempt to impose homogeneous order in the entire region by means of individual farm units, possesing contiguous properties (“coto redondo acasarado”) and the total dispersion of the rural population. This “regional model” formed part of a project which aimed at the uniform valuing of the rural environment by means of the homogeneous distribution of population, infraestructures and “service” elements.
CitationMonclus, F. Agrarismo y ordenación del territorio en el siglo XIX: del poblamiento racional al fomento de la población rural. "Documents d'anàlisi geogràfica", Gener 1984, núm. 4, p. 143-156.
URIhttp://hdl.handle.net/2117/18966
ISSN0212-1573
Publisher versionhttp://www.raco.cat/index.php/DocumentsAnalisi/article/view/41323/52157