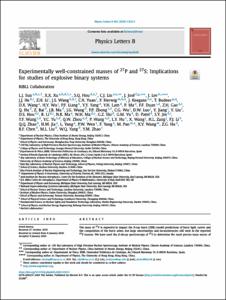 CovenanteeZhongguo yuan zi neng ke xue yan jiu yuan; University of Hong Kong; Shanghai jiao tong da xue
Document typeArticle
PublisherElsevier
Rights accessOpen Access
Abstract
The mass of 27P is expected to impact the X-ray burst (XRB) model predictions of burst light curves and the composition of the burst ashes, but large uncertainties and inconsistencies still exist in the reported 27P masses. We have used the ß-decay spectroscopy of 27S to determine the most precise mass excess of 27P to date to be keV, which is 63 keV (2.3s) higher and a factor of 3 more precise than the value recommended in the 2016 Atomic Mass Evaluation. Based on the new 27P mass, the P reaction rate and its uncertainty were recalculated using Monte Carlo techniques. We also estimated the previously unknown mass excess of 27S to be 17678(77) keV, based on the measured ß-delayed two-proton energy and the Coulomb displacement energy relations. The impact of these well-constrained masses and reaction rates on the modeling of the explosive astrophysical scenarios has been investigated by post-processing XRB and hydrodynamic nova models. Compared to the model calculations based on the masses and rates from databases, the abundance of in the burst ashes is increased by a factor of 2.4, while no substantial change was found in the XRB energy generation rate or the light curve. Our calculation also suggests that 27S is not a significant waiting point in the rapid proton capture process, and the change of the P reaction rate is not sufficiently large to affect the conclusion previously drawn on the nova contribution to the synthesis of galactic 26Al.
CitationSun, L. [et al.]. Experimentally well-constrained masses of 27P and 27S: implications for studies of explosive binary systems. "Physics letters B", 10 Març 2020, vol. 802, p. 135213:1-135213:6.
URIhttp://hdl.handle.net/2117/189611
DOI10.1016/j.physletb.2020.135213
ISSN0370-2693
Publisher versionhttps://www.sciencedirect.com/science/article/pii/S0370269320300174
Collections
Share: