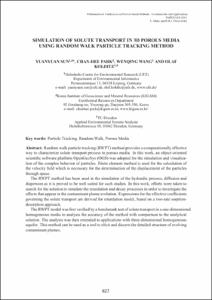 Show full item record
Sun, Yuanyuan
Park, Chan-Hee
Wang, Wenqing
Kolditz, Olaf
Document typeConference report
PublisherCIMNE
Rights accessOpen Access
Abstract
Random walk particle tracking (RWPT) method provides a computationally effective way to characterize solute transport process in porous media. In this work, an object-oriented scientiﬁc software platform OpenGeoSys (OGS) was adopted for the simulation and visualization of the complex behavior of particles. Finite element method is used for the calculation of the velocity ﬁeld which is necessary for the determination of the displacement of the particles through space. The RWPT method has been used in the simulation of the hydraulic process, diffusion and dispersion as it is proved to be well suitedfor such studies. In this work, efforts were taken to search for the solutionto simulate the retardation and decay processe in order to investigate the effects that appear in the contaminant plume evolution. Expressions for the effective coefﬁcients governing the solute transport are derived for retardation model, based on a two-rate sorption-desorption approach. The RWPT model was ﬁrst veriﬁed by a benchmark test of solute transport in a one-dimensional homogeneous media to analysis the accuracy of the method with comparison to the analytical solution. The analysis was the next ended to applications witht hree-dimensional homogeneous aquifer. This method can be used as a tool to elicit and discern the detailed structure of evolving contaminant plumes.
URIhttp://hdl.handle.net/2117/189491
ISBN978-84-89925-67-0
Collections
Share: