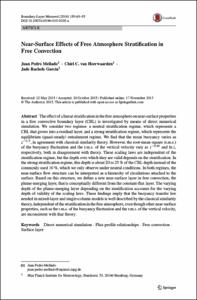 van Heerwaarden, Chiel
Garcia, Jade
Document typeArticle
Rights accessOpen Access
Abstract
The effect of a linear stratification in the free atmosphere on near-surface properties in a free convective boundary layer (CBL) is investigated by means of direct numerical simulation. We consider two regimes: a neutral stratification regime, which represents a CBL that grows into a residual layer, and a strong stratification regime, which represents the equilibrium (quasi-steady) entrainment regime. We find that the mean buoyancy varies as z-1/3, in agreement with classical similarity theory. However, the root-mean-square (r.m.s.) of the buoyancy fluctuation and the r.m.s. of the vertical velocity vary as z-0.45 and ln z, respectively, both in disagreement with theory. These scaling laws are independent of the stratification regime, but the depth over which they are valid depends on the stratification. In the strong stratification regime, this depth is about 20 to 25 % of the CBL depth instead of the commonly used 10 %, which we only observe under neutral conditions. In both regimes, the near-surface flow structure can be interpreted as a hierarchy of circulations attached to the surface. Based on this structure, we define a new near-surface layer in free convection, the plume-merging layer, that is conceptually different from the constant-flux layer. The varying depth of the plume-merging layer depending on the stratification accounts for the varying depth of validity of the scaling laws. These findings imply that the buoyancy transfer law needed in mixed-layer and single-column models is well described by the classical similarity theory, independent of the stratification in the free atmosphere, even though other near-surface properties, such as the r.m.s. of the buoyancy fluctuation and the r.m.s. of the vertical velocity, are inconsistent with that theory.
CitationMellado, J. P.; van Heerwaarden, C.; Garcia, J. Near-surface effects of free atmosphere stratification in free convection. "Boundary-layer meteorology", 1 Abril 2016, vol. 159, p. 69-95.
URIhttp://hdl.handle.net/2117/189384
DOI10.1007/s10546-015-0105-x
ISSN0006-8314
Publisher versionhttps://link.springer.com/article/10.1007/s10546-015-0105-x
Collections
Share: