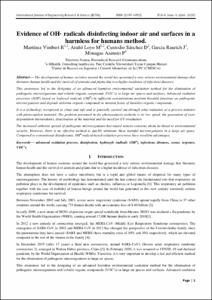 Document typeArticle
PublisherAD Publications
Rights accessOpen Access
Abstract
The development of human societies around the world has generated a very serious environmental damage that threatens human health and the survival of animals and plants due to a higher incidence of infectious diseases. This awareness led to the designing of an advanced harmless environmental sanitation method for the elimination of pathogenic microorganisms and volatile organic compounds (VOC’s) in large air spacesand surfaces. Advanced oxidation processes (AOP) based on hydroxyl radicals (OH¿) in sufficient concentrations perform biocidal functions on pathogenic microorganisms and degrade airborne organic compounds to mineral forms ofharmless organic compounds.It is a technology recognized as clean and safe and is generally carried out through solar radiation as a process initiator with photocatalyst material. The problem presented in the photocatalysis methods is its low speed, the generation of toxic degradation intermediates, deactivation of the material and the need for UV irradiation.The increased airborne spread of pathogenic microorganisms has raised serious concerns about its threat to environmental security. However, there is no effective method to quickly eliminate these harmful microorganisms in a large air space. Compared to conventional disinfectants, OH¿ radical-based oxidation processes have excellent advantages
CitationMartínez, R. [et al.]. Evidence of OH· radicals disinfecting indoor air and surfaces in a harmless for humans method. "International Journal of Engineering Research & Science (IJOER)", 30 Abril 2020, vol. 6, núm. 4, p. 26-38.
URIhttp://hdl.handle.net/2117/189371
DOI10.5281/zenodo.3767883
ISSN2395-6992
Publisher versionhttps://ijoer.com/issue-detail/issue-april-2020
Other identifiershttps://zenodo.org/record/3767883#.Xs-hF8DtbIU
Collections
Share: