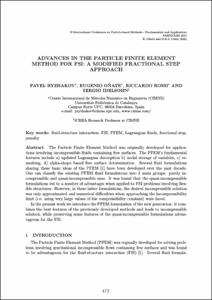 Idelsohn, Sergio
Document typeConference report
PublisherCIMNE
Rights accessOpen Access
Abstract
The Particle Finite Element Method was originally developed for applications involving incompressible ﬂuids containing free surfaces. The PFEM’s fundamental features include a) updated Lagrangian description b) nodal storage of variables, c) remeshing, d) alpha-shape based free surface determination. Several ﬂuid formulations sharing these basic ideas of the PFEM [1] have been developed over the past decade. One can classify the existing PFEM ﬂuid formulations into 2 main groups: purely incompressible and quasi-incompressible ones. It was found that the quasi-incompressible formulations led to a number of advantages when applied to FSI problems involving ﬂexible structures. However, in these latter formulations, the desired incompressible solution was only approximated and numerical diﬃculties when approaching the incompressibility limit (i.e. using very large values of the compressibility constant) were faced. In the present work we introduce the PFEM formulation of the new generation: it combines the best features of the previously developed methods and leads to incompressible solution, while preserving some features of the quasi-incompressible formulations advantageous for the FSI.
URIhttp://hdl.handle.net/2117/189360
ISBN978-84-89925-67-0
Collections
Share: