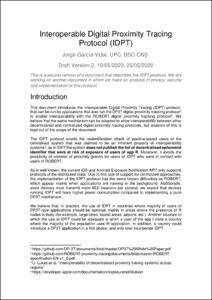 Document typeResearch report
Rights accessOpen Access
Abstract
This document introduces the Interoperable Digital Proximity Tracing (IDPT) protocol, that can be run by applications that also run the DP3T digital proximity tracking protocol to enable interoperability with the ROBERT digital proximity tracking protocol . We believe that the same mechanism can be adapted to allow interoperability between other decentralized and centralized digital proximity tracing protocols, but analysis of this is kept out of the scope of the document. The IDPT protocol avoids the reidentification attack of positive-tested users of the centralised system that was claimed to be an inherent property of interoperability systems , as in IDPT the system does not publish the list of decentralised ephemeral identifier that were at risk of exposure of users of app R. Moreover, it avoids the possibility of creation of proximity graphs for users of IDPT who were in contact with users of ROBERT. As is well known, the current iOS and Android Exposure Notification API only supports protocols of the distributed class. Due to this lack of support for centralized approaches, the implementation of the IDPT protocol has the same known difficulties as ROBERT, which appear mainly when applications are running in the background. Additionally, since devices must transmit more BLE beacons per second, we expect that devices running IDPT will have higher power consumption compared to implementing a pure DP3T mechanism. We believe that, in practice, the use of IDPT in countries where majority of users of DP3T-type applications should be optional, mainly in areas where the presence of R nodes is likely (for example, large cities, tourist areas, airports, etc.). Another situation in which the use of IDPT could be adequate is when a user of the app I visits a country where the majority of the population uses R application. In addition, a country could introduce a DP3T application in a first phase, and only later incorporate IDPT.
Description
Draft Version 2, 19/05/2020, 25/05/2020
CitationGarcía, J. "Interoperable Digital Proximity Tracing protocol (IDPT)". 2020.
URIhttp://hdl.handle.net/2117/189356
URL other repositoryhttps://github.com/IDPTdocs/documents/blob/master/IDPT-v2.pdf
Collections
Share: