On the photometric homogeneity of type IA supernovae 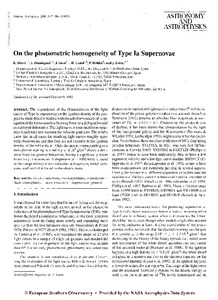 The dependence of the characteristics of the light curves of Type Ia supernovae on the ignition density of the progenitor white dwarf is studied with the aid of two models of propagation of the thermonuclear burning front: as a deflagration and as a delayed detonation. The light curve is computed from opacities which take into account the velocity gradients. The results show that in all cases the resulting light curves roughly agree with observations and that they are not sensitive to the ignition density of the white dwarf. Only the model corresponding to a deflagration starting at a density of 8 x 10 exp 9 g/cu cm shows a deviation from the general behavior, having a significantly lower luminosity at maximum. A dispersion of about 1000 km/s is found in the computed expansion velocities at maximum, which compares well with that found in the observations.
CitationBravo, E. [et al.]. On the photometric homogeneity of type IA supernovae. "Astronomy and astrophysics", Març 1993, vol. 0, núm. 269, p. 187-194.
URIhttp://hdl.handle.net/2117/18905
ISSN0004-6361
Publisher versionhttp://www.aanda.org/