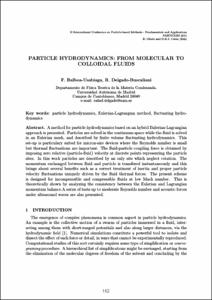 Show full item record
Balboa-Usabiaga, F.
Delgado-Buscalioni, R.
Document typeConference report
PublisherCIMNE
Rights accessOpen Access
Abstract
A method for particle hydrodynamics based on an hybrid Eulerian-Lagrangian approach is presented. Particles are solved in the continuum space while the fluid is solved in an Eulerian mesh, and described by finite volume fluctuating hydrodynamics. This set-up is particulary suited for micron-size devices where the Reynolds number is small but thermal fluctuations are important. The fluid-particle coupling force is obtained by imposing zero relative (particle-fluid) velocity at discrete points representing the particle sites. In this work particles are described by an only site which neglect rotation. The momentum exchanged between fluid and particle is transfered instantaneously and this brings about several benefits such as a correct treatment of inertia and proper particle velocity fluctuations uniquely driven by the fluid thermal forces. The present scheme is designed for incompressible and compressible fluids at low Mach number. This is theoretically shown by analyzing the consistency between the Eulerian and Lagrangian momentum balance.A series of tests up to moderate Reynolds number and acoustic forces under ultrasound waves are also presented. 1 INTRODUCTION
URIhttp://hdl.handle.net/2117/189008
ISBN978-84-89925-67-0
Collections
Share: