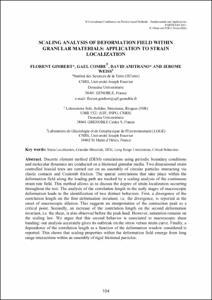 Show full item record
Gimbert, Florent
Combe, Gael
Amitrano, David
Weiss, Jerome
Document typeConference report
PublisherCIMNE
Rights accessOpen Access
Abstract
Discrete element method (DEM) simulations using periodic boundary conditions and molecular dynamics are conducted on a frictional granular media. Two dimensional strain controlled biaxial tests are carried out on an assembly of circular particles interacting via elastic contacts and Coulomb friction. The spatial correlations that take place within the deformation field along the loading path are tracked by a scaling analysis of the continuous strain rate field. This method allows us to discuss the degree of strain localization occurring throughout the test. The analysis of the correlation length in the early stages of macroscopic deformation leads to the identification of two distinct behaviors. First, a divergence of the correlation length on the first deformation invariant, i.e. the divergence, is reported at the onset of macroscopic dilation. This suggests an interpretation of the contraction peak as a critical point. Secondly, an increase of the correlation length on the second deformation invariant, i.e. the shear, is also observed before the peak load. However, saturation remains on the scaling law. We argue that this second behavior is associated to macroscopic shear banding: our analysis accurately gives its outbreak on the stress versus strain curve. Finally, a dependence of the correlation length as a function of the deformation window considered is reported. This shows that scaling properties within the deformation field emerge from long range interactions within an assembly of rigid frictional particles.
URIhttp://hdl.handle.net/2117/188989
ISBN978-84-89925-67-0
Collections
Share: