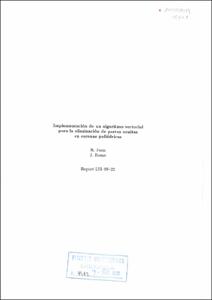 Document typeExternal research report
Rights accessOpen Access
Abstract
An important problem in the dessign of Solid Modelling Systems is the one related with the realistic model rendering. Up until now, several algorithms dealing with this topic have been developed. Most of these algorithms are based either on the scene properties (object scene algorithms), or on the output device features (image space algorithms). In this work, an object space algorithm has been studied and implemented which will apply to polyhedral scenes. The algorithm relies in the features defined by the topology of the model and in an extensive use of geometric connectivity. This algorithm is oriented to be mainly used with vectorial output devices such as vectorial CRTs or plotters
CitationJoan-Arinyo, R. "Implementación de un algoritmo vectorial para la eliminación de partes ocultas en escenas poliédricas". 1987.
Is part ofLSI-88-22
URIhttp://hdl.handle.net/2117/188926
Collections
Share: