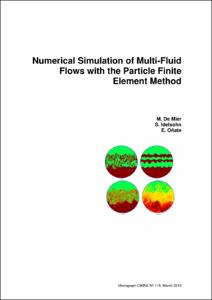 Document typeBook
PublisherInternational Centre for Numerical Methods in Engineering (CIMNE)
Rights accessOpen Access
Abstract
In this monograph we have focused on understanding the basic physical principles of multi-fluid flows and the difficulties that arise in their numerical simulation. We have extended the Particle Finite Element Method to problems involving several different fluids with the aim of exploiting the fact that Lagrangian methods are specially well suited for tracking any kind of interfaces. We have developed a numerical scheme able to deal with large jumps in the physical properties (density and viscosity), include surface tension, and accurately represent all types of discontinuities in the flow variables at the interface. The scheme is based on decoupling the nodes position, velocity and pressure variables through the Picard linearization and a pressure segregation method which takes into account the interface conditions. The interface has been defined to be aligned with the moving mesh, so that it remains sharp along time. Furthermore, pressure degrees of freedom have been duplicated at the interface nodes to represent the discontinuity of this variable due to surface tension and variable viscosity, and the mesh has been refined in the vicinity of the interface to improve the accuracy of the computations. We have applied the resulting scheme to several academic and geological problems,such as the two-fluid sloshing, extrusion of viscous fluids, bubble rise and breakup,mixing of magmatic liquids and negatively buoyant jets.
CitationMier-Torrecilla, M.; Idelsohn, S. R.; Oñate, E. "Numerical simulation of multifluid flows with the particle finite element method". Barcelona: International Centre for Numerical Methods in Engineering (CIMNE), 2010. ISBN 978-84-96736-87-0.
URIhttp://hdl.handle.net/2117/188922
ISBN978-84-96736-87-0
Publisher versionhttps://books.cimne.com/shop/numerical-simulation-of-multi-fluid-flows-with-the-particle-finite-element-method/
Other identifiershttps://www.scipedia.com/public/Mier_et_al_2019a
Collections
Share: