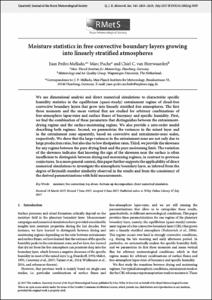 Except where otherwise noted, content on this work is licensed under a Creative Commons license : Attribution-NonCommercial-NoDerivs 3.0 Spain
Abstract
We use dimensional analysis and direct numerical simulations to characterize specific humidity statistics in the equilibrium (quasi-steady) entrainment regime of cloud-free convective boundary layers that grow into linearly stratified free atmospheres. The first three moments and the mean vertical flux are studied for arbitrary combinations of free-atmosphere lapse-rates and surface fluxes of buoyancy and specific humidity. First, we find the combination of these parameters that distinguishes between the entrainmentdrying regime and the surface-moistening regime. We also provide a zero-order model describing both regimes. Second, we parametrize the variances in the mixed layer and in the entrainment zone separately, based on convective and entrainment-zone scales, respectively. We show that the large variances in the entrainment zone are not only due to large production rates, but also due to low dissipation rates. Third, we provide the skewness for any regime between the pure drying limit and the pure moistening limit. The variation of the skewness indicates that knowing the sign of the skewness near the surface is often insufficient to distinguish between drying and moistening regimes, in contrast to previous conjectures. In a more general context, this paper further supports the applicability of direct numerical simulations to investigate the atmospheric boundary layer, as inferred from the degree of Reynolds number similarity observed in the results and from the consistency of the derived parametrizations with field measurements.
CitationMellado, J. P.; Puche, M.; van Heerwaarden, C. Moisture statistics in free convective boundary layers growing into linearly stratified atmospheres. "Quarterly journal of the Royal Meteorological Society", 27 Juliol 2017, vol. 143, p. 2403-2419.
URIhttp://hdl.handle.net/2117/188859
DOI10.1002/qj.3095
ISSN0035-9009
Publisher versionhttps://rmets.onlinelibrary.wiley.com/doi/full/10.1002/qj.3095
Collections
Share: