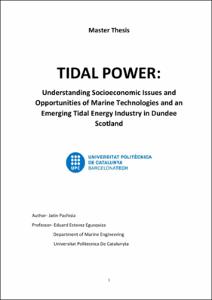 Document typeMaster thesis
Rights accessOpen Access
Abstract
Given the current situation, there is unsettlement over the global climate change, along with that, the cognizance on the worldwide population about the certain need to help reduce the greenhouse gases and in overall the emissions. This has basically led us to help increase the production of energy from renewable resources of energy and lessen our dependence on fossil fuels. The usage of Tidal energy is turning out to be one of the potential energy producers in the 21st century. The potential is massive. Worldwide, the tidal energy that is technically harvestable are along the areas close to the coast and there are several sources where the energy can be obtained up to 1 terawatts (TW) Also, the potential for tidal current technologies is larger than that of tidal range. There are two ways in which the energy can be extracted from the tides that come from the movements of water which can be vertical which takes place with the rise and fall of water, kinetic energy and potential energy, namely, tidal currents. The tidal range technologies help gather the potential energy. On the other hand, the tidal stream turbines help harvest the energy from the tidal currents. The province of Dundee in Scotland has been quietly getting itself into the front seat to make capital out of the opportunities such a boom will offer. The construction process has been going on since the early 2005 where the beginning of the foundations had begun already. This will help push for renewable energy jobs and get more investments in the city but it was only last year that steps had been taken to formalize with the establishment of the Dundee Renewables. The thesis will explore the issues and opportunities of the tidal in-stream energy conversion (TISEC) industry. The collection of data is made with thorough knowledge and reviewing of the socioeconomic issues related to that of TISEC and the other green energy technologies on an international and national scale by emphasizing on regulatory frameworks, research and projects. Further discussions will be made about the projects, case studies and tools that relate to the economic benefits and the development of the community. The particular components of TISEC development will be addressed: 1) The development of the workforce, technology and supply chain; 2) the importance of financing and funding; 3) the welfare that are brought to the community; 4) policies, assessment and the collaborator processes. The TISEC on Dundee will also contain a gap analysis and the current state will be discussed about. There will be several issues discussed related to the legislation and practices to date.
SubjectsTidal power, Greenhouse gases, Energia maremotriu, Gasos d'efecte hivernacle
Location
1: Ardeonaig, Killin FK21 8SU, Regne Unit
URIhttp://hdl.handle.net/2117/188781
Collections
Share: