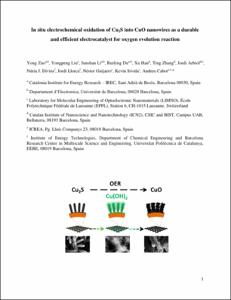 Guijarro, Néstor
Sivula, Kevin
Cabot Codina, Andreu
Document typeArticle
Rights accessOpen Access
Abstract
Development of cost-effective oxygen evolution catalysts is of capital importance for the deployment of large-scale energy-storage systems based on metal–air batteries and reversible fuel cells. In this direction, a wide range of materials have been explored, especially under more favorable alkaline conditions, and several metal chalcogenides have particularly demonstrated excellent performances. However, chalcogenides are thermodynamically less stable than the corresponding oxides and hydroxides under oxidizing potentials in alkaline media. Although this instability in some cases has prevented the application of chalcogenides as oxygen evolution catalysts and it has been disregarded in some others, we propose to use it in our favor to produce high-performance oxygen evolution catalysts. We characterize here the in situ chemical, structural, and morphological transformation during the oxygen evolution reaction (OER) in alkaline media of Cu2S into CuO nanowires, mediating the intermediate formation of Cu(OH)2. We also test their OER activity and stability under OER operation in alkaline media and compare them with the OER performance of Cu(OH)2 and CuO nanostructures directly grown on the surface of a copper mesh. We demonstrate here that CuO produced from in situ electrochemical oxidation of Cu2S displays an extraordinary electrocatalytic performance toward OER, well above that of CuO and Cu(OH)2 synthesized without this transformation.
CitationZuo, Y. [et al.]. In situ electrochemical oxidation of Cu2S into CuO nanowires as a durable and efficient electrocatalyst for oxygen evolution reaction. "Chemistry of materials", 15 Agost 2019, vol. 31, núm. 18, p. 7732-7743.
URIhttp://hdl.handle.net/2117/188753
DOI10.1021/acs.chemmater.9b02790
ISSN0897-4756
Publisher versionhttps://pubs.acs.org/doi/10.1021/acs.chemmater.9b02790
Collections
Share: