Examination on unsteady aerodynamical characteristics of airfoil by a vortex method 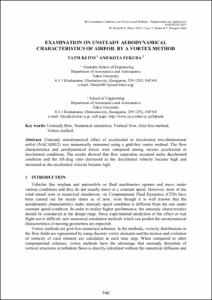