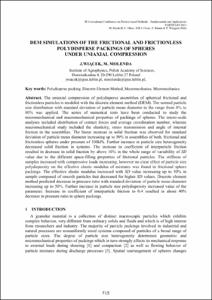 Show full item record
Wiacek, J.
Molenda, M.
Document typeConference report
PublisherCIMNE
Rights accessOpen Access
All rights reserved. This work is protected by the corresponding intellectual and industrial property rights. Without prejudice to any existing legal exemptions, reproduction, distribution, public communication or transformation of this work are prohibited without permission of the copyright holder
Abstract
The uniaxial compression of polydisperse assemblies of spherical frictional and frictionless particles is modeled with the discrete element method (DEM). The normal particle size distribution with standard deviation of particle mean diameter in the range from 0% to 80% was applied. The series of numerical tests have been conducted to study the micromechanical and macromechanical properties of packings of spheres. The micro-scale analyses included distribution of contact forces and average coordination number, whereas macromechanical study included the elasticity, stress transmission and angle of internal friction in the assemblies. The linear increase in solid fraction was observed for standard deviation of particle mean diameter increasing up to 50% in assemblies of both, frictional and frictionless spheres under pressure of 100kPa. Further increase in particle size heterogeneity decreased solid fraction in systems. The increase in coefficient of interparticle friction resulted in decrease in solid fraction by above 10% in the whole range of variability of SD value due to the different space-filling properties of frictional particles. The stiffness of samples increased with compressive loads increasing, however no clear effect of particle size polydispersity on the effective elastic modulus of mixtures was found in frictional sphere packings. The effective elastic modulus increased with SD value increasing up to 50% in sample composed of smooth particles that decreased for higher SD values. Discrete element method predicted decrease in pressure ratio with standard deviation of particle mean diameter increasing up to 50%. Further increase in particle size polydispersity increased value of the parameter. Increase in coefficient of interparticle friction to 0.4 resulted in about 40% decrease in pressure ratio in sphere packings.
URIhttp://hdl.handle.net/2117/188704
ISBN978-84-941531-8-1
Collections
Share: