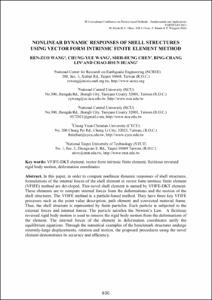 Show full item record
Wang, Ren-Zuo
Wang, Chung-Yue
Chen, Shih-Hung
Lin, Bing-Chang
Huang, Chao-Hsun
Document typeConference report
PublisherCIMNE
Rights accessOpen Access
Abstract
In this paper, in order to compute nonlinear dynamic responses of shell structures, formulations of the internal forces of the shell element in vector form intrinsic finite element (VFIFE) method are developed. This novel shell element is named by VFIFE-DKT element. These elements are to compute internal forces from the deformations and the motion of the shell structures. The VFIFE method is a particle-based method. They have three key VFIFE processes such as the point value description, path element and convected material frame. Thus, the shell structure is represented by finite particles. Each particle is subjected to the external forces and internal forces. The particle satisfies the Newton’s Law. A fictitious reversed rigid body motion is used to remove the rigid body motion from the deformations of the element. The internal forces of the element in deformation coordinates satify the equilibrium equations. Through the numerical examples of the benchmark structures undergo extermly-large displacements, rotation and motion, the proposed procedures using the novel element demonstrates its accuracy and efficiency.
URIhttp://hdl.handle.net/2117/188681
ISBN978-84-941531-8-1
Collections
Share: