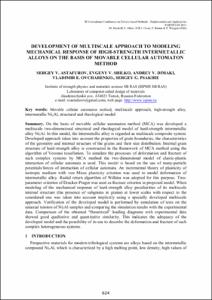 Show full item record
Astafurov, Sergey V.
Dimaki, Andrey V.
Ovcharenko, Vladimir E.
Psakhie, Sergey G.
Shilko, Andrey V.
Document typeConference report
PublisherCIMNE
Rights accessOpen Access
Abstract
On the basis of movable cellular automaton method (MCA) was developed a multiscale two-dimensional structural and rheological model of hard-strength intermetallic alloy Ni3Al. In this model, the intermetallic alloy is regarded as multiscale composite system. Developed approach takes into account the properties of grain boundaries, the characteristics of the geometry and internal structure of the grains and their size distribution. Internal grain structure of hard-strength alloy is constructed in the framework of MCA method using the algorithm of Voronoi tessellation. To simulate the processes of deformation and fracture of such complex systems by MCA method the two-dimensional model of elastic-plastic interaction of cellular automata is used. This model is based on the use of many-particle potentials/forces of interaction of cellular automata. An incremental theory of plasticity of isotropic medium with von Mises plasticity criterion was used to model deformation of intermetallic alloy. Radial return algorithm of Wilkins was adopted for this purpose. Twoparameter criterion of Drucker-Prager was used as fracture criterion in proposed model. When modeling of the mechanical response of hard-strength alloy peculiarities of its multiscale internal structure (the presence of subgrains in grains) at lower scales with respect to the considered one was taken into account implicitly using a specially developed multiscale approach. Verification of the developed model is performed by simulation of tests on the uniaxial tension of Ni3Al samples and comparing the simulation results with the experimental data. Comparison of the obtained “theoretical” loading diagrams with experimental data showed good qualitative and quantitative similarity. This indicates the adequacy of the developed model and the possibility of its use to describe the deformation and fracture of such complex heterogeneous systems.
URIhttp://hdl.handle.net/2117/188678
ISBN978-84-941531-8-1
Collections
Share: