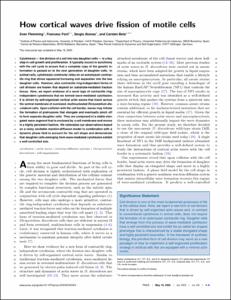 Beta, Carsten
Document typeArticle
Rights accessOpen Access
Abstract
Cytokinesis—the division of a cell into two daughter cells—is a key step in cell growth and proliferation. It typically occurs in synchrony with the cell cycle to ensure that a complete copy of the genetic information is passed on to the next generation of daughter cells. In animal cells, cytokinesis commonly relies on an actomyosin contractile ring that drives equatorial furrowing and separation into the two daughter cells. However, also contractile ring-independent forms of cell division are known that depend on substrate-mediated traction forces. Here, we report evidence of an as yet unknown type of contractile ring-independent cytokinesis that we termed wave-mediated cytofission. It is driven by self-organized cortical actin waves that travel across the ventral membrane of oversized, multinucleated Dictyostelium discoideum cells. Upon collision with the cell border, waves may initiate the formation of protrusions that elongate and eventually pinch off to form separate daughter cells. They are composed of a stable elongated wave segment that is enclosed by a cell membrane and moves in a highly persistent fashion. We rationalize our observations based on a noisy excitable reaction–diffusion model in combination with a dynamic phase field to account for the cell shape and demonstrate that daughter cells emerging from wave-mediated cytofission exhibit a well-controlled size.
CitationFlemming, S. [et al.]. How cortical waves drive fission of motile cells. "Proceedings of the National Academy of Sciences of the United States of America", 24 Març 2020, vol. 117, núm. 12, p. 6330-6338.
URIhttp://hdl.handle.net/2117/188542
DOI10.1073/pnas.1912428117
ISSN0027-8424
Publisher versionhttps://www.pnas.org/content/117/12/6330
Collections
Share: