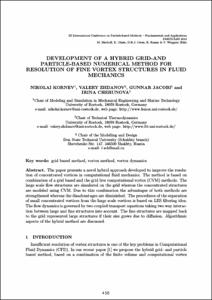 Mostra el registre d'ítem complet
Kornev, Nikolai
Zhdanov, Valery
Jacobi, Gunnar
Cherunova, Irina
Tipus de documentText en actes de congrés
EditorCIMNE
Condicions d'accésAccés obert
Abstract
The paper presents a novel hybrid approach developed to improve the resolution of concentrated vortices in computational ﬂuid mechanics. The method is based on combination of a grid based and the grid free computational vortex (CVM) methods. The large scale ﬂow structures are simulated on the grid whereas the concentrated structures are modeled using CVM. Due to this combination the advantages of both methods are strengthened whereas the disadvantages are diminished. The procedures of the separation of small concentrated vortices from the large scale vortices is based on LES ﬁltering idea. The ﬂow dynamics is governed by two coupled transport equations taking two way interaction between large and ﬁne structures into account. The ﬁne structures are mapped back to the grid represented large structures if their size grows due to diﬀusion. Algorithmic aspects of the hybrid method are discussed.
URIhttp://hdl.handle.net/2117/188516
ISBN978-84-941531-8-1
Col·leccions
Comparteix: