A DEM study of silo discharge of a cohesive solid 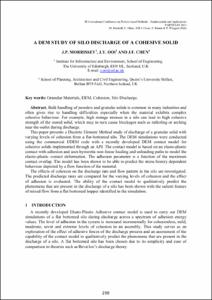 Show full item record
Morrissey, J. P.
Ooi, J.Y.
Chen, J.F.
Document typeConference report
PublisherCIMNE
Rights accessOpen Access
All rights reserved. This work is protected by the corresponding intellectual and industrial property rights. Without prejudice to any existing legal exemptions, reproduction, distribution, public communication or transformation of this work are prohibited without permission of the copyright holder
Abstract
Bulk handling of powders and granular solids is common in many industries and often gives rise to handling difficulties especially when the material exhibits complex cohesive behaviour. For example, high storage stresses in a silo can lead to high cohesive strength of the stored solid, which may in turn cause blockages such as ratholing or arching near the outlet during discharge. This paper presents a Discrete Element Method study of discharge of a granular solid with varying levels of cohesion from a flat-bottomed silo. The DEM simulations were conducted using the commercial EDEM code with a recently developed DEM contact model for cohesive solids implemented through an API. The contact model is based on an elasto-plastic contact with adhesion and uses hysteretic non-linear loading and unloading paths to model the elastic-plastic contact deformation. The adhesion parameter is a function of the maximum contact overlap. The model has been shown to be able to predict the stress history dependent behaviour depicted by a flow function of the material. The effects of cohesion on the discharge rate and flow pattern in the silo are investigated. The predicted discharge rates are compared for the varying levels of cohesion and the effect of adhesion is evaluated. The ability of the contact model to qualitatively predict the phenomena that are present in the discharge of a silo has been shown with the salient feature of mixed flow from a flat bottomed hopper identified in the simulation.
URIhttp://hdl.handle.net/2117/188461
ISBN978-84-941531-8-1
Collections
Share: