Effects of inter-particle friction on the critical state behavior of granular materials: a numerical study 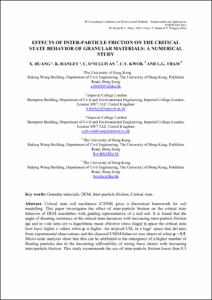 Show full item record
Huang, X.
Hanley, K.
O'Sullivan, C.
Kwok, C.Y.
Tham, L.G.
Document typeConference report
PublisherCIMNE
Rights accessOpen Access
Abstract
Critical state soil mechanics (CSSM) gives a theoretical framework for soil modelling. This paper investigates the effect of inter-particle friction on the critical state behavior of DEM assemblies with grading representative of a real soil. It is found that the angle of shearing resistance at the critical state increases with increasing inter-particle friction (µ) and in void ratio (e) vs logarithmic mean effective stress (log(p’)) space the critical state locii have higher e values when µ is higher. An atypical CSL in e-logp’ space that deviates from experimental observations and the classical CSSM behavior was observed when µ = 0.5. Micro-scale analyses show that this can be attributed to the emergence of a higher number of floating particles due to the increasing self-stability of strong force chains with increasing inter-particle friction. This study recommends the use of inter-particle friction lower than 0.5 in DEM simulations of element testing in soil mechanics.
URIhttp://hdl.handle.net/2117/188383
ISBN978-84-941531-8-1
Collections
Share: