Granular slumping in a fluid : focus on runout distances 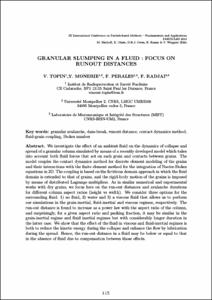 Show full item record
Topin, V.
Monerie, Y.
Perales, F.
Radjai, F.
Document typeConference report
PublisherCIMNE
Rights accessOpen Access
Abstract
We investigate the eﬀect of an ambient ﬂuid on the dynamics of collapse and spread of a granular column simulated by means of a recently developed model which takes into account both ﬂuid forces that act on each grain and contacts between grains. The model couples the contact dynamics method for discrete element modeling of the grains and their interactions with the ﬁnite element method for the integration of Navier-Stokes equations in 2D. The coupling is based on the ﬁctitious domain approach in which the ﬂuid domain is extended to that of grains, and the rigid-body motion of the grains is imposed by means of distributed Lagrange multipliers. As in similar numerical and experimental works with dry grains, we focus here on the run-out distances and avalanche durations for diﬀerent column aspect ratios (height vs width). We consider three options for the surrounding ﬂuid: 1) no ﬂuid, 2) water and 3) a viscous ﬂuid that allows us to perform our simulations in the grain-inertial, ﬂuid-inertial and viscous regimes, respectively. The run-out distance is found to increase as a power law with the aspect ratio of the column, and surprisingly, for a given aspect ratio and packing fraction, it may be similar in the grain-inertial regime and ﬂuid inertial regimes but with considerably longer duration in the latter case. We show that the eﬀect of the ﬂuid in viscous and ﬂuid-inertial regimes is both to reduce the kinetic energy during the collapse and enhance the ﬂow by lubrication during the spread. Hence, the run-out distance in a ﬂuid may be below or equal to that in the absence of ﬂuid due to compensation between those eﬀects.
URIhttp://hdl.handle.net/2117/188320
ISBN978-84-941531-8-1
Collections
Share: