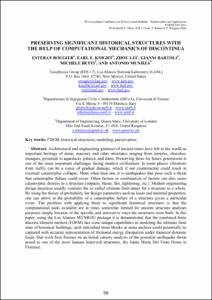 Show full item record
Rougier, Esteban
Knight, Earl E.
Zhou, Lei
Bartoli, Gianni
Betti, Michele
Munjiza, Antonio
Document typeConference report
PublisherCIMNE
Rights accessOpen Access
Abstract
Architectural and engineering geniuses of ancient times have left to the world an important heritage of stone, masonry and other structures ranging from temples, churches, mosques, pyramids to aqueducts, palaces, and dams. Preserving these for future generations is one of the more important challenges facing modern civilization. In some places vibrations from traffic can be a cause of gradual damage, which if not counteracted could result in eventual catastrophic collapse. More often than not, it is earthquakes that pose such a threat that catastrophic failure could occur. Other factors or combination of factors can also cause catastrophic distress to a structure (impacts, blasts, fire, lightening, etc.). Modern engineering design practices usually consider the so called ultimate limit states for a structure as a whole. By using the theory of probability for design parameters such as loads and material properties, one can arrive at the probability of a catastrophic failure of a structure given a particular event. The problem with applying these to significant historical structures is that the computational tools available are at times somewhat limited for ancient structure analyses purposes simply because of the specific and innovative ways the structures were built. In this paper, using the Los Alamos MUNROU package it is demonstrated that the combined finite discrete element method (FDEM) has some unique capabilities in modeling the ultimate limit state ofhistorical buildings;each individual stone blocks or stone anchors could potentially be captured with accurate representation of frictional energy dissipation under transient dynamic loads. Our work here focuses on an initial cursory analysis of the potential earthquake threat posed to one of the most famous historical structures, the Santa Maria Del Fiore Dome in Florence.
URIhttp://hdl.handle.net/2117/188313
ISBN978-84-941531-8-1
Collections
Share: