High-temperature deformation behavior of 718PLUs: Consideration of y' effects 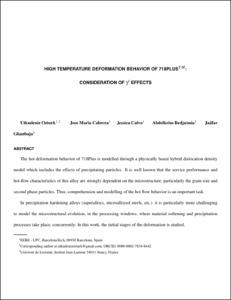 Except where otherwise noted, content on this work is licensed under a Creative Commons license : Attribution-NonCommercial-NoDerivs 3.0 Spain
Abstract
The hot deformation behavior of 718Plus is modeled through a physically based hybrid dislocation density model, which includes the effects of precipitating particles. It is well known that the service performance and hot flow characteristics of this alloy are strongly dependent on the microstructure, particularly the grain size and second-phase particles. Thus, comprehension and modeling of the hot flow behavior is an important task. In precipitation hardening alloys (superalloys, microalloyed steels, etc.), it is particularly challenging to model the microstructural evolution in the processing windows, where material softening and precipitation processes take place concurrently. In this work, the initial stages of the deformation are studied. A model based on dislocation density evolution is presented. As in conventional approaches, the dislocation density is considered as a competition between dislocation generation and dynamic recovery at the early stages of deformation. Recovery is assumed to be driven by glide and climb of dislocations, which are considered to be proportional to the strain rate and damped by the existence of second-phase particles. It is known that under high-temperature deformation conditions, 718Plus may undergo dynamic precipitation. Second-phase particles in the material may impede the grain boundary motion and contribute to an increase in flow stress. To account for the dynamic precipitation, the present model combines experimental results and precipitation models to predict volume fraction and particle size. The effect of aging is studied through transmission electron microscopy (TEM) characterization of the specimens from interrupted tests at the onset of dynamic recrystallization. Stress contribution due to different modes of dislocation precipitation interaction are modeled and integrated to the phenomenological dislocation density–based hardening models.
CitationOzturk, U. [et al.]. High-temperature deformation behavior of 718PLUs: Consideration of y' effects. "Materials Performance and Characterization", 16 Gener 2020, núm. 9, p. 1-18.
URIhttp://hdl.handle.net/2117/188270
DOI10.1520/MPC20190031
ISSN2165-3992
Publisher versionhttps://doi.org/10.1520/MPC20190031
Collections
Share: