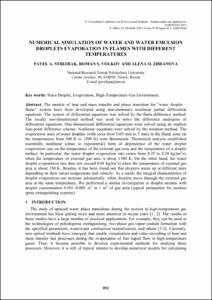 Show full item record
Strizhak, Pavel A.
Volkov, Roman S.
Zhdanova, Alena O.
Document typeConference report
PublisherCIMNE
Rights accessOpen Access
Abstract
The models of heat and mass transfer and phase transition for “water droplet – flame” system have been developed using non-stationary nonlinear partial differential equations. The system of differential equations was solved by the finite-difference method. The locally one-dimensional method was used to solve the difference analogous of differential equations. One-dimensional differential equations were solved using an implicit four-point difference scheme. Nonlinear equations were solved by the iteration method. The evaporation rates of water droplets (with sizes from 0.05 mm to 5 mm) in the flame zone (at the temperatures from 500 K to 1200 K) were determined. Theoretical analysis established essentially nonlinear (close to exponential) form of dependence of the water droplet evaporation rate on the temperature of the external gas area and the temperature of a droplet surface. In particular, the water droplet evaporation rate varies from 0.25 to 0.29 kg/(m2s), when the temperature of external gas area is about 1100 K. On the other hand, the water droplet evaporation rate does not exceed 0.01 kg/(m2s) when the temperature of external gas area is about 350 K. Besides, it has been found out that droplets warm up at different rates depending on their initial temperature and velocity. As a result, the integral characteristics of droplet evaporation can increase substantially, when droplets move through the external gas area at the same temperature. We performed a similar investigation or droplet streams with droplet concentration 0.001–0.005 m3 in 1 m3 of gas area (typical parameters for modern spray extinguishing systems).
URIhttp://hdl.handle.net/2117/188250
ISBN978-84-944244-7-2
Anglès
Collections
Share: