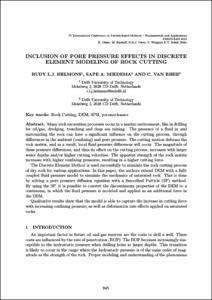 Show full item record
Helmons, Rudy L.J.
Miedema, Sape A.
Van Rhee, C.
Document typeConference report
PublisherCIMNE
Rights accessOpen Access
Abstract
Many rock excavation processes occur in a marine environment, like in drilling for oil/gas, dredging, trenching and deep sea mining. The presence of a ﬂuid in and surrounding the rock can have a signiﬁcant inﬂuence on the cutting process, through diﬀerences in the ambient (conﬁning) and pore pressure. The cutting motion deforms the rock matrix, and as a result, local ﬂuid pressure diﬀerences will occur. The magnitude of these pressure diﬀerences, and thus its eﬀect on the cutting process, increases with larger water depths and/or higher cutting velocities. The apparent strength of the rock matrix increases with higher conﬁning pressures, resulting in a higher cutting force. The Discrete Element Method is used successfully to simulate the rock cutting process of dry rock for various applications. In this paper, the authors extend DEM with a fully coupled ﬂuid pressure model to simulate the mechanics of saturated rock. This is done by solving a pore pressure diﬀusion equation with a Smoothed Particle (SP) method. By using the SP, it is possible to convert the discontinuum properties of the DEM to a continuum, in which the ﬂuid pressure is modeled and applied as an additional force in the DEM. Qualitative results show that the model is able to capture the increase in cutting force with increasing conﬁning pressure, as well as deformation rate eﬀects applied on saturated rocks.
URIhttp://hdl.handle.net/2117/188224
ISBN978-84-944244-7-2
Anglès
Collections
Share: