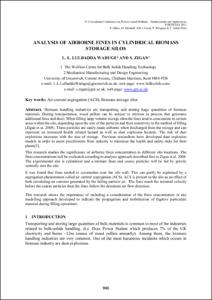 Show full item record
Lulbadda Waduge, L. L.
Zigan, S.
Document typeConference report
PublisherCIMNE
Rights accessOpen Access
Abstract
Biomass handling industries are transporting and storing huge quantities of biomass materials. During transportation, wood pellets can be subject to attrition (a process that generates additional fines and dust). When filling large volume storage silos the fines tend to concentrate in certain areas within the silo, depending upon the size of the particles and their sensitivity to the method of filling (Zigan et al. 2008). These particles are easily made airborne when discharged from the storage and can represent an increased health related hazard as well as dust explosion hazards. The risk of dust explosions increases with the size of storage. Previous researchers have developed dust explosion models in order to assist practitioners from industry to minimise the health and safety risks for their plants[1]. This research studies the significance of airborne fines concentration in different silo locations. The fines concentrations will be evaluated according to analysis approach described first in Zigan et al. 2008. The experimental silo is cylindrical and a mixture fines and coarse particles will be fed by gravity centrally into the silo. It was found that fines tended to accumulate near the silo wall. This can partly be explained by a segregation phenomenon called air current segregation (ACS). ACS is present in the silo as an effect of both circulating air currents generated by the falling particle jet. The fines reach the terminal velocity before the coarse particles then the fines follow the dominant air flow direction. This research shows the importance of including a consideration of the fines concentration in any modelling approach developed to indicate the propagation and mobilisation of fugitive particulate material during filling operations.
URIhttp://hdl.handle.net/2117/188142
ISBN978-84-944244-7-2
Anglès
Collections
Share: