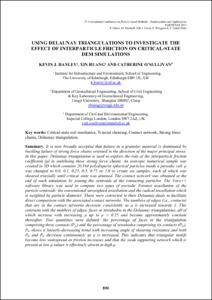 Show full item record
Hanley, Kevin J.
Huang, Xin
O'Sullivan, Catherine
Document typeConference report
PublisherCIMNE
Rights accessOpen Access
Abstract
It is now broadly accepted that failure in a granular material is dominated by buckling failure of strong force chains oriented in the direction of the major principal stress. In this paper, Delaunay triangulation is used to explore the role of the interparticle friction coefficient (μ) in stabilising these strong force chains. An isotropic numerical sample was created in 3D which contains 20,164 polydisperse spherical particles inside a periodic cell. μ was changed to 0.0, 0.1, 0.25, 0.5, 0.75 or 1.0 to create six samples, each of which was sheared triaxially until critical state was attained. The contact network was obtained at the end of each simulation by joining the centroids of the contacting particles. The Voro++ software library was used to compute two types of periodic Voronoi tessellation of the particlecentroids:theconventionalunweightedtessellationandtheradicaltessellationwhich is weighted by particle diameter. These were converted to their Delaunay duals to facilitate direct comparison with the associated contact networks. The numbers of edges (i.e., contacts) that are in the contact networks decrease consistently as μ is increased towards 1. This contrastswiththenumbersofedges,facesortetrahedraintheDelaunaytriangulations,allof which increase with increasing μ up to μ = 0.25 and become approximately constant thereafter. Two quantities were defined: the percentage of faces in the triangulation comprisingthreecontacts(Pfc)andthepercentageoftetrahedracomprisingsixcontacts(Ptc). Pfc shows a linearly-decreasing trend with increasing angle of shearing resistance and both Pfc and Ptc decrease continuously as μ is increased. This indicates that triangular motifs become less widespread as friction increases and that the weak supporting network which is presentat low μ valuesis effectively absent at high μ.
URIhttp://hdl.handle.net/2117/188141
ISBN978-84-944244-7-2
Anglès
Collections
Share: