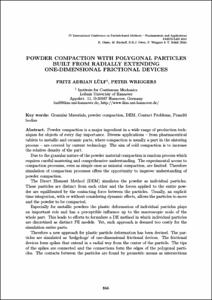 Show full item record
Lülf, Fritz Adrian
Wriggers, Peter
Document typeConference report
PublisherCIMNE
Rights accessOpen Access
Abstract
Powder compaction is a major ingredient in a wide range of production techniques for objects of every day importance. Diverse applications – from pharmaceutical tablets to metallic and ceramic parts, where compaction is usually a part in the sintering process – are covered by current technology. The aim of cold compaction is to increase the relative density of the part. Due to the granular nature of the powder material compaction is random process which requires careful mastering and comprehensive understanding. The experimental access to compaction processes, even as simple ones as uniaxial compaction, are limited. Therefore simulation of compaction processes oﬀers the opportunity to improve understanding of powder compaction. The Direct Element Method (DEM) simulates the powder as individual particles. These particles are distinct from each other and the forces applied to the entire powder are equilibrated by the contacting force between the particles. Usually, an explicit time integration, with or without considering dynamic eﬀects, allows the particles to move and the powder to be compacted. Especially for metallic powders the plastic deformation of individual particles plays an important role and has a perceptible inﬂuence up to the macroscopic scale of the whole part. This leads to eﬀorts to formulate a DE method in which individual particles are discretized as distinct FE models. Yet, such approach is deemed too costly for the simulation entire parts. Therefore a new approach for plastic particle deformation has been devised. The particles are simulated as ’hedgehogs’ of one-dimensional frictional devices. The frictional devices form spikes that extend in a radial way from the center of the particle. The tips of the spikes are connected and the connections form the edges of the polygonal particles. The contacts between the particles are found by geometric means as intersections of the spikes of one particle with the edges of the particle’s contact partner. This indents the spike and its frictional device generates forces that act on the two particles. Multiple contacts between two particles are allowed and concave particles can be treated intrinsically. Preliminary results indicate that this new approach to model plastic particles might bridge the gap between suﬃciently realistic behaviour of the plastic particles and low computational eﬀort. However, for now, the results are based on two-dimensional proofof-concept simulations and, for the sake of simplicity, the springs in the spikes are linear and the friction is rate-independent and perfectly plastic. These model assumption already oﬀer considerable liberties to tune the plastic behaviour of the particles to experimental results.
URIhttp://hdl.handle.net/2117/188139
ISBN978-84-944244-7-2
Anglès
Collections
Share: