Microdynamic analysis of ellipsoidal particle flow in a shear cell 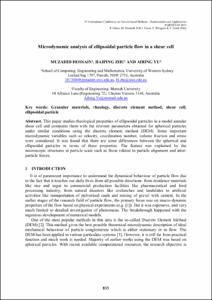 Show full item record
Hossain, Muzahid
Zhu, Haiping
Yu, Aibing
Document typeConference report
PublisherCIMNE
Rights accessOpen Access
Abstract
This paper studies rheological properties of ellipsoidal particles in a model annular shear cell and compares them with the relevant parameters obtained for spherical particles under similar conditions using the discrete element method (DEM). Some important microdynamic variables such as velocity, coordination number, volume fraction and stress were considered. It was found that there are some differences between the spherical and ellipsoidal particles in terms of these properties. The feature was explained by the microscopic structures at particle scale such as those related to particle alignment and interparticle forces
URIhttp://hdl.handle.net/2117/188132
ISBN978-84-944244-7-2
Anglès
Collections
Share: